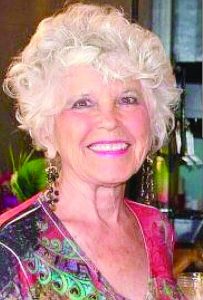 Floree Jacobs Farrar of Geneva, Alabama, passed away on Saturday, Nov. 27, 2021, at her home surrounded by loving family. She was 88 years old.

Floree was born on Jan. 30, 1933, to Charlie Preston and Myrtie Leddon Jacobs, in Geneva, Alabama. She graduated from Geneva High School and was voted “Most Likely to Succeed.” She received her teaching degree from Troy State University, followed by her Master’s Degree in Education and AA Teaching Certificate at Auburn University. She began her career as an English teacher and taught in Coffee Springs and Atlanta before moving back to Geneva where she was the librarian of Geneva High School for more than 35 years. She was so proud to have been instrumental in designing the present library.

Floree met Bill Farrar, a handsome baseball player, when he was sitting on the steps of the girls’ dorm at Troy, watching all the freshmen arrive. She caught his eye, and they were immediately inseparable, although polar opposites. She was studious; he would skip class to play golf. Once, when they had an English class together, she worked hard on a paper while Bill spent hardly any time on it at all. He got a better grade; Floree did not like that.

Bill and Floree were married in 1952 – a wedding that almost didn’t happen. Bill fainted during the ceremony thanks to no air conditioning and a hot tuxedo, and Floree knelt down beside him and insisted that he get up. Luckily, Bill did as he was told – and continued doing so for the next 67 years.

Five years later they welcomed their daughter, Sheree, and two years later a son, Robin. Floree passed on her creativity, intelligence and work ethic to her children.

Floree was fearless. She had Bill teach her to use a shotgun, which came in handy when Sheree and Robin heard a rattlesnake outside one afternoon. Floree – dressed in her pink housecoat – grabbed that shotgun and fired… straight into the barn. Her second shot took care of that snake, and she was sure proud.

She wasn’t afraid of anything. Once, when she and Robin were in New York City, she went out on her own to go to Macy’s. A huge rainstorm popped up, but that didn’t stop her. Not even a flood when she’s on her own in the country’s largest city could keep her from shopping. She was only a tad late for the curtain call to “Will Rogers Folly.”

She loved to fish, but her competitive side took over, and she would wait until Bill, Sheree and Robin got to the pond. She’d look to see who was catching the most fish, sidle up to them, and invade their fishing hole so she could bring in the most.

Floree was a feminist before anyone had ever heard the word. In the ‘50s, pregnant women weren’t supposed to teach. But Floree had just found out she was pregnant with Robin, and she didn’t like that rule. She went to the school board and made her case; they relented. Her mother made her maternity clothes out of housecoat patterns – even in a maternity dress, she wanted to have that Floree flair.

Floree was an avid member of the Athenaeum Club, the local affiliate of the Alabama Federation of Women’s Clubs, serving in multiple capacities during her more than 50 years of involvement. She was a devoted and active member of The First United Methodist Church of Geneva, serving on various councils, boards and committees.

Floree and Bill loved to travel and saw the world together. From eastern and western Europe to South Vietnam, Australia, Hong Kong, South America and all across the U.S., they loved to experience new places, cultures and people. They even rode an elephant in Thailand.

If you know Floree, you know she loved to arrange flowers, and she could never do a small arrangement – they were ALWAYS big, just like her personality. She kept the church foyer filled with fresh flowers and there was never a day at the Geneva High School library that she didn’t have fresh flowers waiting on the students. She loved looking out her windows at home to see all the flowers in bloom she had planted over the years.

Floree was the ultimate hostess. She loved to shop – sparkly tops and glitzy earrings were her favorites, and she always wore high heels – even up until a few weeks ago. She loved the theater, loved to laugh, loved to dance and loved a good bourbon and Coke. She liked things larger than life, and that’s how she enjoyed every day.

Funeral services will be held at 2 p.m. on Tuesday, Nov. 30, 2021, at Warren Holloway Ward Funeral Home in Geneva, with Pastor Tony Rosetta officiating. Burial will follow at Sunset Memorial Gardens Cemetery. The family will receive friends at the funeral home on Tuesday beginning at 1:00 p.m., and will continue until service time.

In lieu of flowers, the family requests donations be made in Mrs. Farrar’s memory to the First United Methodist Church, 304 South Academy Street, Geneva, AL 36340.