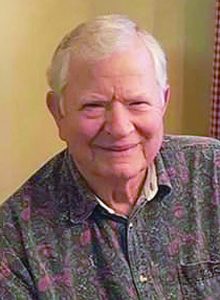 Billy Green Blalock, age 89 passed away on Wednesday, December 29, 2021 at his home surrounded by his loving family.

Funeral services were held at 11:00 a.m. on Saturday, January 1, 2022 at the First Baptist Church of Samson with Rev. Danny Branch officiating. Burial followed at Pleasant Home Baptist Church Cemetery with Warren Holloway Ward Funeral Home of Geneva directing. The family received friends at the church on Saturday beginning at 10:00 a.m.

Mr. Blalock was born in Jefferson County, AL on January 1, 1932 to the late Edna Blalock. He was raised by his grandmother, Mrs. Sarah F. Blalock. He lived the majority of his life in Geneva, County, AL.

He proudly served in the US Navy during the Korean War. After being honorably discharged from the Navy, he worked at Wiregrass Electric as a lineman in Hartford. He was later transferred to Samson to be the manger of the district office. He retired with the power company after 37 ½ years of service. Mr. Blalock was a member of the First Baptist Church of Samson.

He is preceded in death by his mother, grandparents, infant grandson, Samuel Eli Blalock, and son-in-law, Fred McCall.

He is survived by his wife of 62 years, Margaret Virginia Hendrix Blalock; one son, William A. Blalock (Jane); one daughter, Deborah McCall; four granddaughters, Sarah Wise (Chris), Hannah Blalock, Jessa & Christa McCall all of Samson, AL. Mr. Blalock will be greatly missed by all that knew him.

The family would like to extend a special thank you to Frosty Johnson for her devoted love and care.