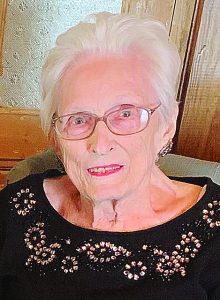 Joan Spear Helms of Geneva, Alabama, passed away peacefully at her home on Tuesday, February 1, 2022 surrounded by friends and family. She was 92 years old.

Joan was born on November 17, 1929, to Arleigh B. Spear and Ibbie Eliza Donelle Spear in Mineola, Texas. Soon after her birth, her parents moved back to their beloved Hartford, Alabama. She graduated from Geneva County High School in 1947. Joan attended Montevallo University and the University of Alabama. She remained a faithful supporter of the Crimson Tide all of her life.

Joan married James “Jimmy”  Clifford Helms, Sr., her childhood sweetheart, on September 16, 1951. Together they lived and worked in Geneva together at WGEA radio until Jimmy died in 1980. At that time Joan ran the radio station until 1998.

She is survived by 1 son, James “Jamie” Clifford Helms, Jr. (Nashville) and many nieces and nephews. Joan was a faithful member of the First United Methodist Church in Geneva serving as president of the UMW, chairman of the council on ministries and singing in the church choir until she was 80 years old. She also served the church as one of the kitchen angels cooking and serving for various functions in the church until she retired from service in 2016. Joan was a solid republican and often gave her political opinion whenever anyone asked or didn’t ask.

A special thank you to Patti Hidle, Gloyce Curry, Sherel Crews, Ann McClenney, and Jewell Grimes who gave Joan such special care the last years of her life.

Graveside services will be held at  Hartford  City cemetery on Saturday, February 5, 2022 at 10:00 a.m. with Rev. Ben Vickers officiating and Warren Holloway Ward Funeral Home of Geneva directing. In lieu of flowers, gifts may be made in her honor to Geneva First United Methodist Church.