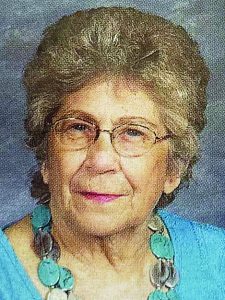 Mary enjoyed serving her community and was an active member of Southside Baptist Church. She loved being a part of the Quilting Ministry. As a member of the VFW Club, she served as president of The Ladies Auxiliary.

She was co-owner of Wilson Wyatt Building Supply and Showcase Shoes. She also worked at Bill’s Dollar Store and in the lab testing peanuts at the Opp Co-op. Her love for yard sales eventually turned into a business venture by renting a booth at “Just Stuff”.

Cooking was her passion and she was known for her peanut brittle, pound cake and pecan pies. She also loved gospel and country music and enjoyed playing guitar with friends.

Her life was centered around her love for her family (Especially grandkids) and her friends. She was beloved by many and will be greatly missed.

The family would like to express their gratitude to Wyatt Funeral Home, as well as to Danny Bass, who delivered a heartfelt eulogy during the funeral.

Special thanks to Dayspring Hospice, nurses and support staff for the care and encouragement they gave mother and our family throughout the last four months.

Also, thanks to Southside Baptist Church, friends and family for the food and support during this time of bereavement.