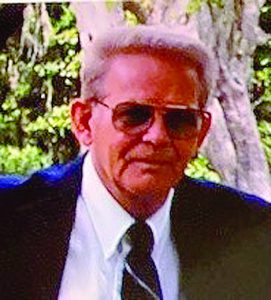 John Allen Hinson passed away peacefully on February 2, 2022, in Fort Walton Beach, Florida.  He was born on November 11, 1939, in Port St. Joe, Florida.  John Allen was preceded in death by his father and mother, Mr. Hadley Henry Hinson and Sallie Bedsole Hinson; his sisters, Martha H. McLean, Julaine H. Schoeas, and Alma Jean Simmons; his treasured Grandmother, Ms. Martha Jane Bedsole, who raised him for the rest of his childhood after the early passing of his mother; and his uncle and aunt, Fred and Julia Calvert, who were always there for John Allen.  He is survived by his daughter, Martha Dowd (John); granddaughters, Chelsea Dowd and Lacey Dowd; several nieces, nephews, and cousins; and his treasured and loyal cat, Luann.

John Allen attended and graduated from Samson High School in 1957.  He was the best-looking guy in the class, and many of the girls said he was the best-looking guy in the whole county.  He was always dressed perfectly, and you would not find a hair out of place or a wrinkle in his clothes.  He treated everyone with great respect and was always there for his friends and family.

He was a United States military veteran, having served in the United States National Guard in Samson and having been mobilized to defend our Country during the Berlin Crisis.  John Allen started a family after his military service, and some of his best memories were taking his family to the Beach Campground in Panama City Beach on the weekends and summer vacations.  The whole family created amazing memories on these trips.  John Allen enjoyed taking the kids to Miracle Strip Amusement Park, spending time on the beach, and fishing in the Panama City area.  Later in his life, he continued his fishing career on Martha’s dock in Fort Walton Beach with his grandchildren, where he caught trout, flounder, and redfish.

After his military service, he began working in the private sector as an Aviation Maintenance Technician at Eglin Air Force Base, and soon after moved his family to Niceville, Florida.

He specialized in jet engines and kept our Country’s finest state-of-the-art jet aircraft in the air and available to defend our freedom.  He was heralded by his peers for being thorough, precise, and constantly improving the skills of himself and those around him.  He made everyone around him better.  Due to his high level of competence as an aviation specialist, he was often flown to bases around the Country where jets were grounded due to complex mechanical issues.  Upon his retirement, he moved to Panama City Beach for a few years, then back to Samson, Alabama, which was his true home.  It was a place he loved and felt comfortable.  He had many dear friends in Samson whom he truly treasured.  Samson is a special place where everyone looks out for and protects each other.  John Allen’s family truly appreciates all of his friends from Samson.  In his later years, he moved to Fort Walton Beach, Florida, and lived with his daughter, son-in-law, and grandchildren.  He was proud to be there through all of his grandchildren’s school years and to see them both thrive and eventually head off to Auburn University (even though he had to bite his tongue because he was a diehard Alabama fan).  His granddaughters truly loved him and were proud of the opportunity to have him living with them during such important years of their lives.  They were there for him every second, making sure he always had everything he needed.

John Allen was a gifted mechanic and could truly fix anything no matter what was wrong with it.

He especially liked fixing things that people said could not be fixed.  He loved a challenge.  He was one of the kindest and most gentle people you have ever met.  He was always there for his daughter and granddaughters, who were the lights of his life.  He would often drive down to Fort Walton and take care of his grandchildren so that his daughter and son-in-law could work.  He was always positive and a true rock to his family.

John Allen was treasured and loved by his family and friends and will be truly missed.  We will all look forward to seeing his beautiful smile and enjoying his positivity, and loving nature again one day.  Roll Tide, John Allen!

A Private Family Service will be held, and John Allen will be interred in Beal Memorial Cemetery in Fort Walton Beach, Florida.  In lieu of flowers, memorials may be made to the charity of your choice.