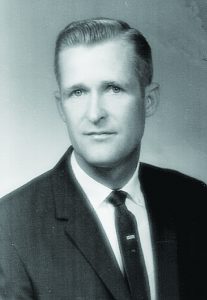 Longtime resident of Opp, Thurman Nutt, passed away Sunday, February 13th, 2022 in Port Orange, Florida at age 91 surrounded by family and friends. An avid golfer, Thurman remained active up until the final years. Shortly before his death, he was excited to be planning a move back to Opp to spend his time among friends and be close to his wife of 65 years JoAnn Tyson Nutt and his parents Trudy Bell and Joseph Jackson Nutt of Beulah. He was preceded in death by his two older brothers Clarence and Truman and younger sister Lillie Foye. Born December 27, 1930 in Rose Hill, he spent most of his childhood in Beulah and was a standout basketball player at Opp High, graduating in 1949.

During high school, he began work as a DO student at the First National Bank of Opp rising to the position of Executive Vice President in charge of Commercial and Installment Loans. Known for his honesty and integrity, he was a highly regarded banker among the business leaders in the community. He worked a total of 46 years at the bank. He also served as a director of the bank and was an active leader in the Civitan Club, Chamber of Commerce, and various school booster organizations. His work at the bank was interrupted by stints in the US Army and National Guard and he served during the Korean War out of high school. When his unit was called up during the Berlin Crisis in 1961 he held the rank of First Lieutenant.

Thurman and JoAnn have two children, Kathy N. Andress of Ormand Beach, Florida and William T. Nutt, Jr. of Peachtree City, Georgia. He has four grandchildren and seven great grandchildren. Funeral arrangements are being handled by Wyatt Funeral Home with interment at Peaceful Acres Cemetery. The funeral will be held Saturday February 19th at 10:00 am with visitation at 9:00 am. Wayne Sharpe will be officiating. Pall bearers will include Shayne Lord, Dale Glisson, Deuce Taylor, Dwight Bryan, Randy Griffin, and Scott Weeks.