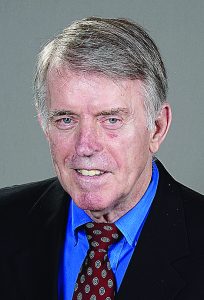 A Memorial Service will be held on Saturday, February 26th at Frazer United Methodist Church Founder’s Chapel, Montgomery, Alabama with Pastor Charles Wise officiating. Visitation will be at 10:00 a.m. with the service to follow at 11:00 a.m.

Paul Wise graduated from Kinston High School in 1960 and continued his education at Auburn University, graduating in 1964 with a Bachelor of Science degree in Education. While at Auburn he was an active member of Alpha Gamma Rho Fraternity where he served as social chairman. He returned to Kinston after graduation to begin farming on his family’s farm.  Paul was very active in the Opp Jaycees and well known for his involvement in the annual Rattlesnake Rodeo.  He later moved to Montgomery  where he had a long career in cosmetology sales.  After retiring, he enjoyed working part time at Frazer Church as well as working for the Montgomery Biscuits baseball team. Frazer Church Singles Ministry was an important part of his life where he made many lifelong friends.

He was preceded in death by his mother, Ruby Nell Gilchrist Wise, and father, James Robert Wise of Kinston, and brother Abner Bob Wise.

He is  survived by two daughters, Cindy (Barlyn) Holland of Enterprise and Rosemary (Jeff) Gulledge of Montgomery, and son Robert Wise of Tampa, Florida;  step daughter Heather Pate (Mike) of Montgomery; sister Teresa Wise Hall (Dr. Jack) Anderson of Enterprise; Granddaughter, Mallory Gulledge, Grandsons:   Browder and Garrison Gulledge, and Lucas and Matthew Rickenbacker; Sister-in-law Meta Campbell (Byron) of Jacksonville, Florida; and many nieces, nephews, cousins and friends.   Special thanks to Amedisys Hospice for their loving care for Paul at the end of his life.

In lieu of flowers, memorials may be made in Paul’s name to Frazer Church, 6000 Atlanta Highway, Montgomery, AL 36117.