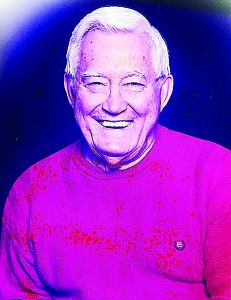 Joe was born December 10, 1933, the eldest son of Charles (Charlie) and Lottie Lee Barnes of Opp. After growing up on a farm in the 30s and 40s and graduating Kinston High School, he joined the Army as an Artilleryman where he travelled the world, serving his country. As a young Soldier, he served in Berlin, Germany as part of the Occupation Forces and later Cold War. He also served in classified assignments including Thessaloniki, Greece. Joe earned his stripes as a Noncommissioned Officer while serving in the Republic of Korea and later in combat in the Republic of Vietnam. These significant tours overseas were marked by occasional tours stateside including Fort Sill, Oklahoma where he was a Drill Sergeant and later Operations Sergeant until he retired after 20 years of service.

Joe began the next chapter of his life when he returned to Opp, working at the mills and as an EMT with the rescue squad. He loved bowling and the Crimson Tide; he was very active in the community where he became a 32d Degree Mason, Shriner and a Gideon as well as the Post Commander of the local Veterans of Foreign Wars.  Joe found great satisfaction in helping people, but he felt a special reward by helping his military brothers and sisters of the Vietnam era. He remained active in church, civics and Veterans Affairs for all of his life.

Joe was preceded in death by his love, Louise. He is survived by his sons, Joseph N. Barnes, Jr. and wife, Meg, and Charles “Chuck” Barnes; daughters, Millie Butler and husband, Joe, Kellie Bryson and husband, Jerry, and Jackie Jennings and husband, Lee; brother, Charles Donald Barnes; sister, Peggy Barnes Weekley; along with a multitude of grandchildren, great-grandchildren and great-great grandchildren.

Funeral services for Mr. Joseph N. Barnes, Sr. will be held at 2:00 pm Tuesday, March 15, 2022 from Wyatt Funeral Home Chapel with military graveside honors following in Peaceful Acres Memorial Gardens. Visitation will be held one hour prior to the service. Wayne Sharpe and Donald Hall will be officiating.

Flowers will be accepted or memorials may be made to Wounded Warrior Project at www.woundedwarriorproject.org or The Covington Veterans Foundation, Covington County, Alabama at www.covvets.org