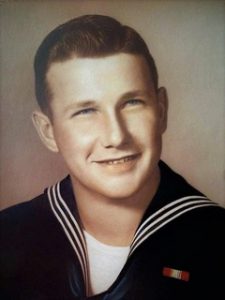 Willie graduated from Opp High School in 1951 and soon after joined the U.S. Navy. He served for 4 years active duty during the Korean Conflict and later in the Army Reserve. After finishing his active duty in the Navy, he attended Troy State University, finishing with a BS in Accounting with a minor in Education. He later received his MS in Education from the University of Alabama.

Mr. Cook has been a member of Westview Baptist Church, Opp, AL, since 1941 and has served in many leadership roles throughout the years; including deacon, teacher and choir member. He taught for the Opp City Schools for 28 years, serving as the Vocational Industrial Coordinator (VIE) for many of those. He also announced Opp Bobcat football games for 25 years, a role which combined his love for the Bobcats and supporting the students. Up until his recent health decline, he could still be seen supporting Opp students at all kinds of sports and other events. Wille was inducted into the Opp Hall of Fame in 2014. He was also a long-time member of the Lion’s Club and Trail Master’s Club.

Funeral services for Mr. Willie F. Cook will be held at 3:00 pm Sunday, May 29, 2022 from Westview Baptist Church with burial following in Peaceful Acres Memorial Gardens. Visitation will be at the church one hour prior to the service. Bro. Gary Miller and Bro. Larry Jackson will be officiating along with Brian Simmons and Matt Simmons at the graveside service. Serving as pallbearers will be Nick Franklin, Brian Simmons, Matt Simmons, Dylan Cook, Joey Giesen and David Ashe.