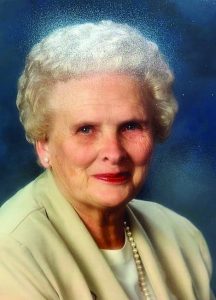 Billie Yancey Bailey passed from this life peacefully in her sleep on Friday July 22, 2022, in the Opp Health & Rehab, at the age of ninety. She was born on September 7, 1931 in Coffee County, Alabama, grew up in the Ino Community, attended Kinston School, and lived her adult life in Coffee and Covington Counties with her husband and family.

A long-time member of Brooklyn Baptist Church, Mrs. Bailey loved her church and its members. She especially enjoyed preparing food and attending the church’s covered-dish get-to-gathers.

Mrs. Bailey’s greatest joy was her family, and she was as involved in the lives of her family members as time and distance would allow. A true Southern cook, she especially enjoyed preparing meals and deserts for her large family. She made her home a welcoming place where her family loved to gather for huge, Sunday lunches and holidays. Summers were spend tending to prize vegetable gardens, preparing by canning or freezing those vegetables so her family could enjoy the fruits of her labor all year.

In the 1950’s, sixties, and seventy’s, Mrs. Bailey made several of her daughters’ dresses and spent many hours in the process while they were in school. Her dinning room table was covered with fabrics and patterns that were being prepared for sewing. The Singer sewing machine was always open in the den with a dress creation in progress. During the day, she would stop her sewing activities and attend to her other homemaker duties. Mrs. Bailey was a devoted wife of 49 years to James Bailey, until his death in January 2001. As farmer’s wife, she was a major source of help to her husband and was ready to lend a hand when needed with the cattle and crops. She prepared meals for farm workers when they came during harvesting time and other special farm projects.

Mrs. Bailey’s display of a strong work ethic was a blessing for her daughters who developed into women of character and integrity. She taught them also to keep pressing on no matter how discouraging things became in life. She will be missed by her family, but leaves them with a legacy of love, grace, and beauty, and she will be missed as well by others in her community.

The family wants to thank Woodmoore Assisted Living and Opp Health & Rehab for their kindness, caregiving, and professional support. Also, appreciation to Opportunity EMS and Carol for her willingness to transport our mother to special family gatherings.