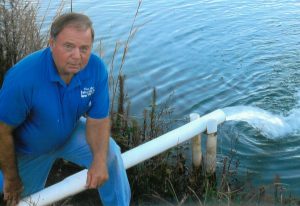 He was born in Cuthbert, Georgia on August 29, 1943, to the late Abner and Cora Belle Gary. He graduated from Cuthbert High School in 1963 and has enjoyed keeping in touch with special friends at class reunions. While in high school he met his wife, Daisy Seymour at a 4-H district competition and they began their married life in 1963.

While married, he attended and graduated from Auburn University in 1969 with a bachelor’s degree in Agricultural Education. A job with the Geneva County Extension Service after graduation brought his family to Geneva where he enjoyed living for 52 years. He shared his love of farming as he led the youth in the 4-H programs in the county. One of his favorite views from his home was seeing his cattle grazing in the pasture around the pond.

Then he started his own business, Dan Gary Well Drilling. He loved to serve and meet the needs of others. Not only did he take pride in what he did, but he truly relished the friends he made during his 38 years of drilling water wells and doing pump repairs.

He was a longtime member of Maple Avenue Baptist Church. John 3:16 was his favorite scripture verse, and he had his grandchildren say it with him often. After he became sick, he made it a goal of his to make sure everyone he came in close contact with had a Bible. He would ask the nurses and his workers if they had a Bible. If they didn’t, he got one and gave it to them.

Dan had a great love for boats. He enjoyed fishing, just going boat riding, and really enjoyed it with his family.

The funeral service will be at Maple Avenue Baptist Church of Geneva on August 20, 2022, with visitation at 1:00 PM followed by the service at 2:00 PM with burial at Sunset Memorial Gardens.

Warren~Holloway~Ward Funeral Home (334) 684-9999, is in charge of arrangements. “Continuing The Trust You’ve Placed In Us” To sign a guest register, please visit: www.whwfuneralhome.com