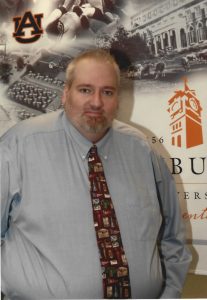 Anthony Lee Donaldson, a resident of Auburn, Alabama, died on September 13, 2022, at 55 years of age having been born April 3, 1967. He finally lost his battle with a rare illness that he fought hard for 31 years of his life. But, despite his struggles, he left this world a better place.

Anthony loved history and teaching history to college students. After graduating Samson High School, he prepared himself for his chosen profession by earning a Bachelor of Science at Troy University and a Master of Arts at the University of South Alabama. He completed post graduate work at Auburn University. Students at Auburn University, Auburn University at Montgomery, and Columbus State University benefited from his lectures, his sense of humor, and his intense preparation and enthusiasm for the classes that he taught. Anthony also published articles in professional journals and presented lectures outside the classroom at professional seminars and other scholarly events. He received a number of research awards and grants. Although Anthony studied and worked at Auburn University, he remained an avid Alabama football fan throughout his life.

He also loved music. He played trumpet in the Samson High School Band and Troy University’s “The Sound of the South” marching band. During his college years and beyond, he was also a member of “The Moonlighters” swing band and performed throughout the southeast.

A graveside memorial will be held Friday, September 30, 2022, at 1:00 p.m. at Fairview Cemetery. Pittman Funeral Home of Samson, Alabama, will direct. In lieu of flowers, please make a donation to your local humane society in Anthony’s name.