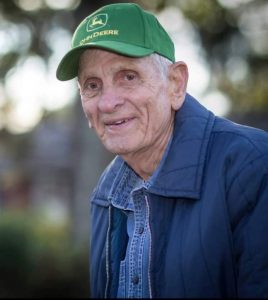 Mr. William Junior Robinson, age 94, of Opp, Alabama passed away on Thursday, December 15, 2022 surrounded by his family and loved ones.

William (Junior) was born September 5, 1928 in Hale County, Alabama.  William’s younger years were spent with his family in the Moundville area and Aliceville Alabama in Pickens County.  Mr. Robinson enjoyed life and would tell anyone he never had a bad day.  His friends and family will also tell anyone that they are a better person for having known William.  During his life, Mr. Robinson was a farmer, truck driver, soldier, mechanic, carnival employee, a proud veteran and Corporal and for the majority of his life he was employed with Opp and Micolas Textile Incorporated in Opp, Alabama.  Mr. Robinson was a veteran of the Korean Conflict having served in the United States Army as a member of the 68th Anti-Aircraft Artillery Unit.  As further testament to his work ethic, at the age of 90 William made a decision to retire from the public lawn care business. His hobbies included working hard, fishing, hunting, gardening and being a good man.  For those that knew William they remember him as a devoted husband, a loving father, grandfather, great-grandfather and loyal friend, with a healthy respect for his Lord and Savior. All who knew “Junior” would comment, “a life lived well”.  William was a member of Southside Baptist Church in Opp, Alabama and regularly attended services there.

Mr. Robinson had many good friends through his life but none more special than his neighbors, Tracy Weaver (Laura) and Keith Kendrick (Amy).

Funeral services for Mr. William Junior Robinson will be held at 2:00 pm Monday, December 19, 2022 from Wyatt Funeral Home Chapel with burial following in Peaceful Acres Memorial Gardens. Visitation will be held one hour prior to the service. Gary Miller will be officiating. Serving as pallbearers will be Keith Kendrick, Michael Sullivan, Matthew Robinson and Jacob Rogers ; Craig Wilson, Bryant Kendrick and Tracy Weaver.

The family will be receiving friends at the Robinson home, 100 Meadows Street, Opp, Alabama. Flowers will be accepted or memorials may be made to the charity of one’s choice.